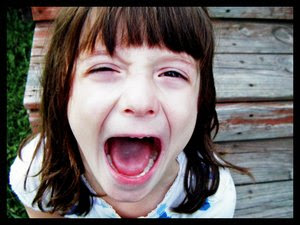 (Part II)
Yesterday I introduced you to the newest disorder on the block: Obnoxious Disorder (or OD, for short). Today, I want to educate you regarding the possible causes of this debilitating neurological disorder.
Before I do that, I want to also describe two additional types of OD that did not make it into the DSM-V but garnered serious consideration by the task force. The first concerned younger children: Whining/Tattling Type. Its symptoms are self-explanatory. There was also some consideration for “Like” Type, which is a problem where children tend to say “like” in a manner unbefitting the word. It’s like really annoying, but apparently is not like serious enough to be considered like a mental disorder. Personally, I like think they missed the boat on this one. It like makes someone sound like a mental defective.
The DSM-V estimates that the prevalence of Obnoxious Disorder ranges from 12-15% boys in the United States and 6-8% of girls. It does not explain the possible reasons for this significant difference (although billions in research grants are sought from the National Institute of Mental Health to investigate this crucial question). While no known biological cause is known, some possibilities have been postulated. Some medical researchers believe that persons with OD may have too much stupamine, a close cousin of the neurotransmitter dopamine. A competing hypothesis includes prenatal exposure to Barbara Streisand. Some researchers have also postulated that the following social factors may contribute to Obnoxious Disorder:
• Uncles. Apparently, very heavy influence by uncles may result in learned obnoxious behaviors. (This may be particularly true for Bodily Noises Type)
• GameCube, Xbox 360, PlayStation2, PS2, ad nauseum. Any adult who knows a child who is obsessed with the newest and coolest toys knows how this tends to create severely obnoxious behavior.
• T.V. This is, of course, debatable, but the following shows could certainly be considered “obnoxifacient”: “Family Guy”, “South Park”, “Caillou”, and “The Wiggles”. For those of you who have seen the latter show, you know what I mean.
Hopefully, when you encounter an obnoxious child, you can now feel secure in knowing that someone can diagnose and treat such a culturally draining problem. Schools, parents, and mental health professionals must work as a team to fight this dreaded epidemic.
In the future, I will discuss how Obnoxious Disorder is diagnosed and treated. Until then, I suggest that parents keep all uncles away from children and that they practice saying, “No, you can’t have that toy” and “Let’s just watch ‘Mr. Rogers’ Neighborhood’”. No one was ever obnoxious in Mr. Rogers’ neighborhood.