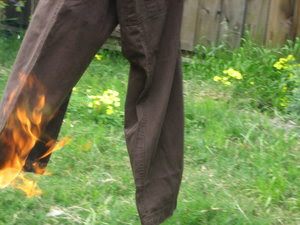 Perhaps you have read the study published just yesterday about parents lying to their children. The study, printed in the Journal of Moral Development, reported that a surprisingly high percentage of parents lie to their children. The spectrum of untruths was broad, ranging from outright lies about monsters in the closet eating children who don’t eat their vegetables to little white lies about tooth fairies and Easter bunnies.

It is ironic that my last post encourages parents to fib to their kids, so I want to address that apparent contradiction.

First, placebo requires an incomplete transmission of truth. If someone knows that a treatment is a placebo, it will usually diminish the power of the placebo (although oddly, not all of it). This is why researchers nefariously attempt to “break the blind” in research studies—in order to reduce the power of the placebo treatment compared to the experimental drug. So telling your child that The Miyagi Treatment is bogus would render it essentially useless.

Second, lying to children is a time-honored tradition. Think about the following: Santa, the Tooth Fairy, the Easter Bunny, teeth falling out if they are not brushed, “This is the Cubs year”, Mom getting her tattoo as a “contest prize”, and insisted that the squeaking bed the kids heard last night was “Dad was fixing it; everyone knows that late night is the best time to fix a bed”. Heck, my kids all think they were bought at Target (although we let our eldest change the story to Nordstrom; she has her reputation to maintain). Is there really any harm in these little whoppers when the truth is finally discovered?

Third, of course some lies are not healthy for children. Lying to older children about important family facts is not usually a good idea, unless the truth would be too painful to comprehend or a confidence would be broken. As a child gets older, it is crucial that children perceive parents as truth-tellers; otherwise they will not earn the child’s trust. Minor white lies will not damage that trust.

I’m curious…what lies have you all told your children that you believe are justifiable and even healthy? Are there any you believe in retrospect were not worthwhile? I’m eager to hear your stories.

Now you’ll excuse me, I have to go fix my bed.