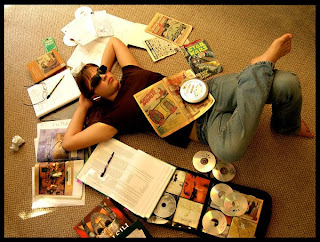 OK, let’s see a show of hands: who thinks it is a good idea to multi-task while studying or completing homework? I’m talking about things like watching TV, listening to music, checking for chat responses on the computer, or texting friends.

Teenagers answering that question tend to give multi-tasking lukewarm support, although rather than insisting it is a good thing, they tend to defend multi-tasking as something less heinous than a mortal sin. Parents, on the other hand, instinctively know that multi-tasking is not such a good idea.

Part of the problem is that parents tend to be consummate multi-taskers. What stay-at-home mom isn’t juggling 20 different things: cooking, cleaning, coordinating rides, disciplining children, talking to friends, running errands, and answering the constant flow of inane questions that children seem to offer up when Mom is in the middle of everything?

Children aren’t coming out of left field when they ask, “If Mom does it all day, why in the world can’t I watch TV when I do my Math?”

The difference is that many of Mom’s tasks don’t require complex thinking—at least the kind of complex thinking that requires the deep, undivided attention involved in reading, writing, and arithmetic. I’m not denigrating Mom’s work—believe me, it’s a lot more work than I want to do; it’s just a different kind of work.

A pretty good unbiased study performed at the National Academy of Sciences illustrates how students who multi-task often perceived themselves at skilled at performing complex cognitive tasks while watching TV and other potentially distracting stimuli, but in fact were quite poor at it.

Specifically, students were far less able to perform two crucial cognitive tasks. The first is filtering, which is focusing on a key task while ignoring or shutting out other stimuli. Students who attempted to multi-task had a horrible time filtering out both auditory and visual extraneous stimuli. The second is task-switching: shifting attention from one task to another. Multi-taskers were surprisingly very slow at going from the secondary task (watching TV, texting, etc.) back to the primary task (homework, studying).

In the end, students who multi-tasked comprehended far less material and were able to recall a great deal less of it the next day.

If you desire the greatest success for your child, initiate appropriate homework and studying rules in the earlier grades. Expect your child to turn off cell phones, the computer, TV, video games, and the radio. Set the expectation early and allow few exceptions.