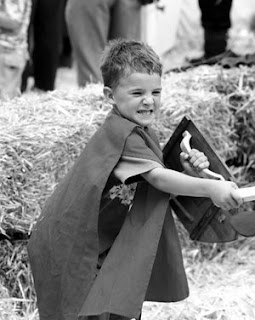 Oh, did I do a boneheaded thing today…

One of the reasons I love having a boy is that he loves to roughhouse. My girls crave affection, but they prefer the tender, snuggly type. That’s great stuff, but sometimes a dad just needs to play rough. And that’s where my son makes a perfect playmate at times. We rumble on the floor, he tackles me, and we play-fight with swords, sticks and fists. Sometimes I chase him all over the house, fireman-carry him to the bed, and throw him like a discarded sack of potatoes. He LOVES it.
Well, today we got home from church and I could tell he was just asking for some rough stuff, so I picked him up and play-slammed him on the floor. He beamed; so far so good. Then he got on his belly and begged me to shove him with my leg down our hardwood floor. We’ve done it a thousand times and he loves it. So I got into it, got ready to shove him, and wheeeeee!!! He glided down the floor…face-first, right into the open metal door of our puppy’s cage. I cringed when I saw it–hoping he would just laugh it off, as he often does with injuries sustained in our rough play.
But this one hurt. He immediately winced and began crying hysterically. I responded by immediately apologizing, trying to console him. He would have none of it. He was irate–and rightly so. He started hitting me, pushing me away; in a few seconds, he worked himself up into a pretty good lather. He ran into his room and onto his bed. This is usually a sign that he wants to be left alone. I respect his wishes.
He cried for a good 10 minutes. I checked in on him after a few, asking him if he still needed some time. He nodded. When I came back after five more minutes, he was calm and accepted my entrance. I grabbed him, hugged him super tight, and apologized about a hundred times. Before long, we were cuddling and joking. I took him to Starbucks and let him have anything he wanted (sans caffeine, of course); heck, I felt like I needed to make amends.
My son has got a pretty nasty scrape next to his nose that he’ll have for a few days. But he also showed a pretty hearty sense of forgiveness. And that warms my heart like nobody’s business.