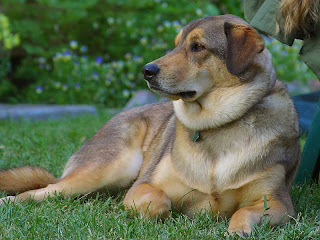 We got a new puppy a few weeks ago and we are doing the whirlwind tour of puppy training books, videos, and TV shows. The most striking we have encountered is Cesar Millan, aka “The Dog Whisperer”. He really is tremendously knowledgeable about dogs; even more impressive is his knowledge of animal behavior. I have learned quite a bit about dogs, but have also been reminded some general behavior training principles that also pertain to human behavior.

One of his key maxims is establishing a calm dominant relationship with a puppy. The corollary to this is rewarding only calm submissive behavior. The biggest problem with dog owners, he says, is inadvertently rewarding excitable or challenging behavior.

The same can be said for parents. For any discipline to work, a parent must establish a dominant relationship with the child. This does not the same as being domineering and does not need to be (in fact should not be) done in an hostile, aggressive manner. However, children need a clear, consistent message from the parent that the parent is in charge and will reward only appropriate, respectful behavior.

If he can train previously misbehaving and out of control dogs—which have far less developed frontal lobes than human children—how much more possible it is to train children to submit to parents and control their behavior!

All parents could learn a thing or two from the Dog Whisperer. Maybe I need to change my title from Clinical Psychologist to “Child Whisperer.”