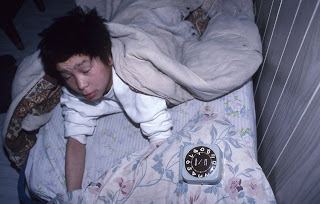 Almost every family has one child who is a bear to wake up in the morning. Either the child appears in a semi-dead state for so long that you begin to wonder if you need to call 911 or the child becomes extremely grumpy or even hostile upon being roused from his or her slumber.

One courageous parent I know solves the problem by letting Junior sleep in. He brings him to school at 9:30, sometimes 10 AM. What are they going to do, call DCFS?

But if you’re not that brave—or if you reject the notion that children should be able to sleep in—you have to find a way to get your cherub up and at ‘em without turning into a demon.

Here are some suggestions for either type of child:

First, have him wake himself with an alarm clock. You should start training your child to wake himself as soon as possible. This is a great way to foster independence.

Make sure the alarm clock is loud enough, but not obnoxious like some (there are some cool ones that use nature sounds or animal noises).

Third, if he does not wake himself by the prescribed time, Mom or Dad will wake him. There is no penalty or punishment—only not earning the small reward for that day.

Finally, regardless of who/what wakes him, any disrespect will not be tolerated: there will be an automatic, significant consequence for any disrespectful hostility. Grumpy is allowed; disrespect is not.

For the Slow Waker-Upper, it might be highly advantageous for you or your child to pick out the day’s clothes the night before, so that your child isn’t stumbling around in the dark trying to figure it out with half-closed eyes. Additionally, having the backpack ready to go the night before can save all kinds of delay and grumpiness due to unnecessary rushing.
In general, the more pre-planning you can do for the morning rush, the better it will be for everyone. Sit down with your children and plan the morning time. Let them know that you do not wish to rush them, but certain things must be done. You might be surprised to get some excellent suggestions from them. In the meantime, try structuring the morning a bit better and see how that helps.
That’s enough for now; I’m going back to sleep.