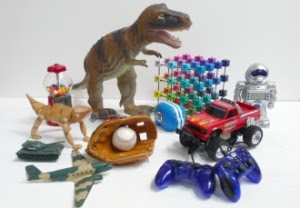 Projection. You probably learned about it in your Psychology 101 class. In case you have never heard of it, it is one of the classic defense mechanisms Freud conceived and wrote about. Projection is one of the most primitive defenses that people use (Freudians would say that paranoid delusions are a manifestation of projections). It’s also one of the most difficult to deal with in children.

I took my son to the store a few days ago to buy his sisters some Christmas presents from him. It should be a surprise to no one that this was a difficult task for a 4-year-old boy, who immediately focused on what he wanted for Christmas, not what his sisters wanted. To his credit, he was able to refocus with a little encouragement. Sort of.

Although his task was to find something for his sisters, it was genuinely entertaining during the next 10 minutes to hear the litany of things he said his sisters would want: a set of Hot Wheel cars, light sabers, toy guns, and a bucket of army men.

My son was projecting his desires onto his sisters. He knew that it wasn’t acceptable for him to say, “I want this and that”; he had already learned that I would not approve of this. At the same time, he simply could not shut off his desire for boy-friendly toys. So his mind created a compromise: he imagined that his sisters wanted these things. In this way, it became acceptable for him to desire them, without appearing or perceiving himself as being selfish. Voila!

We witness kids projecting all the time. See if you can notice in the coming weeks how your children use projection in their relationships with you and others. Remember, it is quite normal. Younger children are not developmentally able to put themselves in others’ shoes, but they are more than able to presume that others think and feel just as they do. It is our job as parents to help guide them away from projecting their feelings and take ownership of them by expressing them in a safe way.

2 thoughts on “I Think the Mrs. Wants a Football for Christmas…”