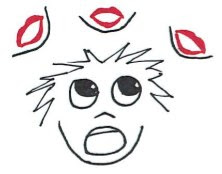 A recent study by the Dutch researcher A. Bartels-Velthuis of University Medical Center Groningen determined that approximately 10 percent of seven and eight-year-olds hear voices. This study was refreshing in that she didn’t seem eager to pathologize children who do hear voices: “These voices in general have a limited impact in daily life. In most cases, the voices will just disappear. I would advise (parents) to reassure their child and to watch him or her closely.”

Furthermore, up to 16 percent of mentally healthy children and teens may hear voices, the research team noted in the British Journal of Psychiatry. They added that while hearing voices can signal a heightened risk of schizophrenia and other psychotic disorders in later life, they add, the “great majority” of young people who have these experiences never become mentally ill.

This study is fundamentally different from so many others in the mainstream. Many studies focusing on childhood behavior seem heavily biased toward a medical, pathological view of any “abnormal” or different patterns. For example, children who throw temper tantrums are often viewed as having Bipolar Disorder or Oppositional Defiant Disorder, when there is no evidence that these children have any medical or mental disorder. Most of them simply require better parenting and/or healing from significant relational-emotional wounds.

I wish more studies would focus on an understanding that children with differences are often just that: different.