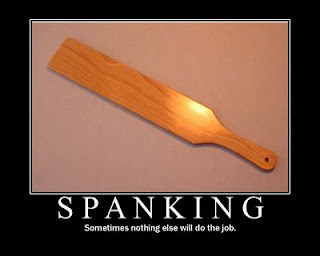 As I have mentioned on this blog—and discuss at length in my book Desperately Seeking Parents—spanking has both proponents and opponents who are intensely passionate and vocal. In my opinion, both extremes are ill conceived and neither is supported by quality research.

It seems as though every couple weeks, a new study arrives on the scene either lauding or lamenting the practice of spanking. The newest study, performed by a professor at my alma mater, Calvin College, suggests that young children spanked by their parents may actually grow up to be happier and more successful than those whose buns escape pain early in life.

According to the research, children spanked up to age six were likely as teenagers to perform better at school and were more likely to carry out volunteer work and to want to go to college than their peers who had never been physically disciplined.

There was a difference, however, in those children who were spanked into adolescence. Those children showed a clear increase in behavior problems.

So maybe spanking itself doesn’t make disturbed children. More likely, there is a subset of parents who spank who ALSO lose control, spank out of rage, say horrible, nasty things to their children, and don’t utilize any other means of discipline who produce the negative results. That’s what I think.

Anyway, the study’s author concludes that “The claims made for not spanking children fail to hold up. They are not consistent with the data. I think of spanking as a dangerous tool, but there are times when there is a job big enough for a dangerous tool. You just don’t use it for all your jobs.”

I could hardly say it better.

Spanking is not for regular discipline or correction. Used as a primary tool, it is less effective than other means and can often become counterproductive. Spanking should only be used for those “big jobs”, like establishing the understanding that defiance (e.g., not going to Time Out) will not be tolerated.

Like I say in my book, if you can’t spank without rage or losing control, don’t spank. Ever. It’s not for you. But wise and self-controlled parents can use moderate, controlled spanking to help achieve an appropriate hierarchy with their children and make discipline way easier in the long run.