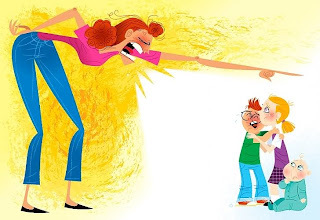 The anti-spanking crusaders are at it again. Another study—this one included a nice large sample of 2,500 participants—showed that those who were spanked more frequently at age 3 were more likely to be aggressive by age 5.

Supposedly, the study controlled for other factors that might lead to aggression at age 5:
“Led by Catherine Taylor, the Tulane study was the first to control simultaneously for variables that are most likely to confound the association between spanking and later aggressive behavior. The researchers accounted for factors such as acts of neglect by the mother, violence or aggression between the parents, maternal stress and depression, the mother’s use of alcohol and drugs, and even whether the mother considered abortion while pregnant with the child.”
But the study misses several crucial confounding variables!
First, how was the child spanked? Was it in a rageful manner? That is the most important factor in discipline—whatever method the parent uses (spanking, yelling, time out, taking privileges), calm, self-controlled parenting fosters calm, self-controlled behavior in children. Many parents who spank do so in a violent, rageful manner. THIS is what creates a violent child, not the spanking.
Second, did the spanking parents also yell and scream and otherwise verbally abuse the child? A child can avoid spanking but still get the parent’s rage; sometimes violent words are enough to induce violent fantasies and urges in a child.
Third, did the parent also “rage out” on other siblings? So child #1 doesn’t get spanked, but witnesses Mom or Dad raging at a sibling. This isn’t healthy either.
Fourth, was the child spanked by just one parent, both parents, other adults, other siblings, etc.?
Fifth, did the parent use spanking for all disciplinary measures or were Time Out and other methods also used? This is key. I would agree wholeheartedly with the anti-spanking camp that spanking should not be the primary method of discipline. It can lose its effectiveness over time, never teaches new patterns of behavior, often only frightens a child into compliance, and holds some risk.
However, a parent who calmly spanks a child after explaining why the child is being spanked and does so only to create a foundation for other primary methods of discipline (such as Time Out) is never going to develop a pattern of violence in the child. Never.
The American Academy of Pediatrics admits that spanking can stop a child from misbehaving in the short-term. Exactly. During that initial short-term period, parents should transition to Time Out to train their child to obey and respect others. Many children respond to self-controlled, reasonable spanking with an adjustment in their attitude toward parents.
Should children live in abject fear of their parents? Heck no. Should there be a modicum of fear, such that induces the child to respect the parent and submit to his or her authority? Absolutely. Spanking achieves this, if done properly. Then Time Outs and other methods can do their work.
In the end, this study has little benefit to the scientific debate. It does, however, help the anti-spanking zealots’ crusade.

4 thoughts on “Again With the Spanking…”