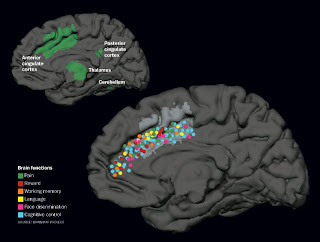 An interesting German study was recently published that found the “pain matrix”: a location in the brain that registers emotional pain and memories of pain.

The psychologists in the study had 16 subjects read pain-related words while imagining situations that corresponded to each word. They were then asked to repeat the exercise, but were distracted by a brain-teaser as they read the words. During the experiments, participants had their brains scanned with functional Magnetic Resonance Imagining (fMRI).

The experimenters found that when people heard or read words such as “plaguing,” “tormenting,” and “grueling,” the section of the brain that retains memories of painful experiences was triggered. Not exactly rocket science, but so far, so interesting.

What was advertised, however, was something far more profound–and questionable. The marketing department of the study reported that painful words are just as traumatic as physical pain–essentially suggesting that the brain does not distinguish between physical and emotional pain.

But does this suggest that name-calling produces the same kind of pain as a kick in the shin, a punch in the gut, or being choked? This is an important question, given the attention that media are playing to the issue of bullying in our schools.

There is no doubt that name-calling can be destructive; children who bully with their words should be held accountable just as surely as children who bully with their fists. Believe me, in my world, bullies would much rather face a firing squad than deal with the consequences I would dream up for them. However, part of the solution to this form of bullying must be helping victims of verbal bullying build their immunity to this nonsense.

Being called names like “retard,” “fag,” “loser,” “Mama’s boy,” and other derogatory terms can hurt. But they don’t have to. Children can’t stop a kick in the gut from hurting, but they can learn how to filter verbal assaults in ways that prevent pain.

One of the things that allows verbal bullying its effect is that the child values what the bully thinks. Think of it, what do I care if some stranger comes up to me and says that I’m retarded? But if a colleague or family member said it, it would hurt. Why? Because I care what my family and colleagues think of me; I couldn’t care less what strangers think.

Children can be taught to distinguish this way. What family and teachers and best friends think matters. What bullies think does not matter. In fact, the opinion of a bully means nothing because bullies are morally and intellectually inferior.

This should become the mantra: WHAT BULLIES SAY MEANS NOTHING. If adults and the majority of children unite in this, the victims of verbal bullying can minimize the pain and can actually mean it when they say, “Sticks and stones can break my bones, but names will never hurt me.”