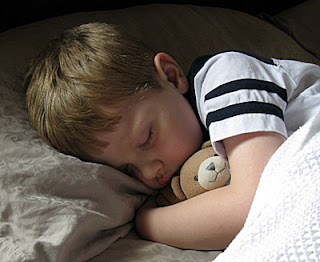 A brand new study concluded that making up for repeated nights of poor sleep cannot be done in just a night or two.

Researchers found that after five days—an average school or work week—of insufficient sleep, a 10-hour night of sleep only recovered a small amount of the “sleep deficit.” Participants continued to exhibit poor attention, limited memory retention, delayed reaction times, and marked difficulty in regulating emotions. These findings bolster the growing consensus that people can accumulate a “sleep debt” if they regularly go without proper sleep, even if they attempt to make up for it on weekends.

Study researcher David Dinges said, “Lifestyles that involve chronic sleep restriction during the workweek and during days off work may result in continuing buildup of sleep pressure and in an increased likelihood of loss of alertness and increased errors.”

This is particularly important for parents during the month of August—when children tend to continue summer sleep schedules. With the school year rapidly approaching, it would be wise for parents to begin re-regulating their child’s sleep schedule. It is impossible to transition Junior to sleeping from 9-7, for example, if he has been sleeping from 11-9 all summer. It will take a couple weeks, with bedtimes incrementally backing up to the earlier time.

During the school year, it is imperative that parents prioritize their child’s sleep, since almost every cognitive function requires adequate sleep and deficiencies cannot easily be remedied by sleeping in during the weekend.

Start now; have a sleep schedule. Encourage healthy sleep hygiene, so that your child develops patterns that will be habitual by the time school starts. You will lessen the stressful transition—although I can’t promise you will get rid of that stress altogether. That’s a bit above my pay grade.