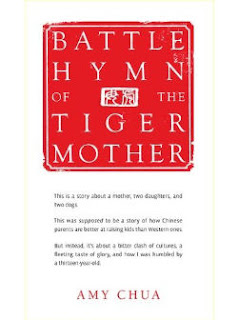 It’s time I jump into the fray on Professor Chua’s contention, asserted in her book, that Chinese mothers are superior.

To begin, the very notion suggests that there is a competition between Chinese mothers and American mothers. I find this highly suspect. There is already enough competition between China and the United States to inspire a whole library section of books. I don’t think that American mothers should concern themselves with whether Beijing mothers are better. As interesting as it would be to have parenting as a new Olympic sport, I think we should avoid making this into a contest.

However, let’s examine the argument, presuming that there can be such a thing as a superior mother.

Chua contends that American parents—represented by the primary caretaker, the mother—are essentially too wimpy. American mothers spend too much time tiptoeing around their children, fearing that they might damage their child’s self-esteem and creating conflict with their child. On that count, Chua is preaching to the choir. As I assert in my book, American parents are guilty of this ridiculous pattern.

Chua praises the directness and stark hierarchal structure of the Chinese family. Parent says; child does. Period. There is no sass, defiance, or negotiation. So far, so good.

There are some questionable extremes in Chinese (and many Eastern) family structures. She recounts a daughter being forced to practice a piano piece for three hours. It is justified when the child finally masters the piece and exudes pride for having accomplished her goal. In some ways, this could be an enormously powerful experience. The child’s abilities are respected and an important lesson is learned: hard work must often be lengthy and arduous and even significantly uncomfortable. This lesson will certainly help the child in future endeavors. This kind of parenting could cure our ADHD epidemic. Hurray for Eastern medicine!

These examples delineate some of the superior aspects of non-Western parenting. If more American parents moved to a parent-first philosophy with stricter discipline, respecting children’s fortitude and the necessity of challenges to build character and endurance, then I would be pleased.

But there is another side of the ledger in this equation.

Let’s look at WHY Chinese parents tend to parent this way. It is consistent with the Eastern view of children and family. The communal view of children is that children exist to serve the family; their accomplishments and behavior directly reflect the esteem of the family. In Eastern families, there is no such thing as individual self-esteem. There is family esteem. Each person is expected to subjugate their will to that of the family. When they do this, they are good.

It is consistent, then, for Eastern parents to have extremely strict expectations of their children. Play dates, sleepovers, and other experiences are not simply luxuries; they are a colossal waste of time.

Contrast this with the parenting philosophy of American parents. Children are, by and large, considered individuals with equal value, will, and self-determination. Even in strict families, children are trained toward an individualistic lifestyle. Children are taught to discover themselves—for their own good.

In Christian families, this is amended by the idea of finding one’s individual gifts and talents and to perceive them as traits that can be used to further the Kingdom of God. But still the emphasis is on the individual.

There is an additional contrast between Chinese and American families that must be noted. China is a Communist regime that has a one-child policy. That one child, it could be hypothesized, holds enormous pressure to continue the family’s aspirations. Any thoughts of this are dispersed among multiple children in most American families. If Johnny doesn’t get a Harvard law degree, maybe Suzy will. We’ll make sure Johnny can at least dunk or make a video that ends up on YouTube.

In the end, Chinese mothers do a magnificent job at raising their children—in many ways. But to measure successful parenting based on a child’s accomplishments reveals more about the values of Chinese mothers far more than their skill at parenting. Similarly, the way American parents raise their children reveals a great deal about their own values. Each set of parents is simply living out their beliefs and values—and quite successfully.

That is both scary and encouraging.