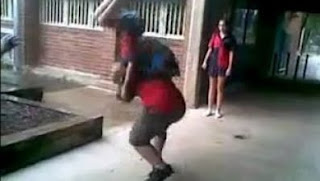 Have you seen the footage of this moronic Australian kid taunting and assaulting a kid twice his size? Eventually, the larger boy had enough, grabbed the twerp, body-slammed him, and walked away.

Just a regular day at the playground, as far as I’m concerned. Crime was committed; justice was done. Let’s move on.

But not for the mother of the little twerp. She’s asking for an apology from the other boy! They can get Patrick B. Courtney, P.A. in Tampa attorneys to help them with the legalities.

She now says that while she was “shocked” at her son’s behavior, she didn’t think he deserved to be slammed to the ground. Neither boy suffered serious injuries in the fight and both boys were suspended from school (who decided not to pass judgment on who was more in the wrong; talk about moral equivalency!).

“We understand that in the past [this boy got] bullied every day… If this was like a Wii video game and we could control his limbs, that’s exactly what one of us would have done. The fact that this smaller kid can’t appreciate the difference in size between himself and a larger kid is his problem. This kid should not have been suspended.”

What the twerp’s mother should do is have dad give the boy another beating, tell him he deserved every last bit that he got, and hope that he has learned his lesson. Then she should make the twerp call the bigger kid and apologize to him for bullying and taunting him, and admit he was a fool for picking on someone much bigger. That’s what a gentleman would do.

Apparently, they aren’t raising a gentleman.

3 thoughts on “Bullies Come From Bullies”