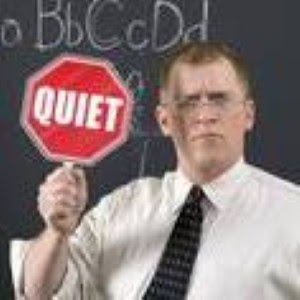 As if we needed more evidence that the fundamental hierarchy between adults and children is completely out of whack:

A California school teacher was placed on paid administrative leave after he rattled a table to get the attention of his math students, startling an eighth-grade girl who used her cell phone to call police.

Officers found a calm teacher with class in session.

The sergeant says the teacher’s table-rattling startled a student and she used her cell phone to call 911. He says other students in the class weren’t bothered by the teacher’s actions.

Redwood City School District deputy superintendent John Baker says the teacher was placed on leave because there was a police response.

This is ridiculous in so many ways, it’s difficult to know where to start.

First, cell phones should be banned in classrooms. Period. There is no good reason why children need a cell phone in school. Children were educated quite well for centuries without cell phones in the classroom; they can do just fine without them now. All schools should have a no tolerance policy regarding cell phones. Kids should keep them in their locker or not bring them at all. School allowing them are just asking for trouble. This story is Exhibit A.

Second, are children today so thin-skinned that they can’t handle a little table-rattling? Are they all THAT profoundly wimpy? Frankly, I think MORE teachers should be rattling things, and they should be rattling more than tables.

Third, what the heck is a police officer doing answering a call like that?? That kid should be arrested for wasting the police’s time and for making a phony 911 call. Tell her to deal with it.

Fourth, why is the teacher put on administrative leave? That teacher–provided that the information we have is correct and that he/she did nothing abusive–should be commended, in front of the entire class, then in front of the entire school. Any children or parents who don’t like it can pull their kid out of school.

Sometimes, a teacher needs to rattle a desk. Sometimes a parent needs to crack a skull. Sometimes a police officer needs to pull rank and tell a student to get the hell back to work and stop challenging the authority of the adult who is in charge.

Man up, school districts. Don’t pussyfoot around with the kids; they need grown-ups in charge.

1 thought on “The Inmates Are Running the Asylum”