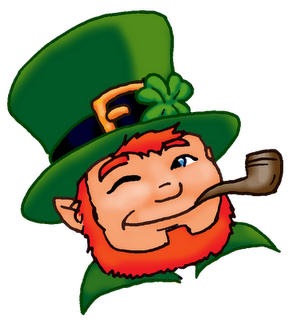 Leprechauns. You don’t hear too much about them except now, in the middle of March, when the Chicago River turns green, parades fill the TVs, Shamrock Shakes make their yearly appearance, and moms boil up a dose of corned beef and cabbage. It seems everyone is Irish on St. Patrick’s Day.

But what do we really know about Leprechauns? Are they real or just a figment of some Irish storyteller’s drunken imagination? Where did they come from? What do they do? What are they like? Where (if anywhere) is their famed pot of gold? Do they all have beards? Are there any girl Leprechauns?

Here is the untold story.

Leprechauns are not simply little humans. They are not even human, although they have several human characteristics. As everyone knows, they live in Ireland. But they weren’t originally from there. Many generations ago, they lived close to the lands where elves, dwarfs, and hobbits all resided peacefully. All three peoples intermingled. A few generations’ worth of intermarriage sprouted the race that we now call leprechauns. They lived on their own, mostly, not craving the company of others. But they did have a clearly defined moral sense. They were committed to helping the poor; sort of a pre-dated Robin Hood clan. They were also highly skilled at deception and craftworks.

Because of their skill and friendliness, a large group of young lippies (as they were known to other folk) were invited by none other than Santa Claus to work at his massive workshop. And so a good portion of the leprechaun tribe emigrated to the North Pole. For generations, the leppies and elves coexisted peacefully in Santa’s working crew, with the more technically savvy leppies forging and building what the creative and inspired elves dreamed of. Every year, they piggy-backed on each other’s Christmas spirit with buoyant joy and playfulness.

But alas, there were a few leppies whose actions were a bit too playful. Whether it was their natural tendency toward troublemaking or the harsh cold of the arctic winters, some could not help themselves. No one knows their true names–these were lost in their sacred chronicles that have since been lost–but we do know what they did.

One Christmas season, about three days before Christmas Eve, when the weather was wretchedly frigid, a small detachment of leppies played a practical joke on the Chief elf, Bon-tilith. After all the elves were soundly asleep, the leppies despoiled their co-workers of all of the years’ toys that had been stored away. They hid them in their own cave-storage, then laughed late into the night. When they awoke, they crept in to the shop, where the elves were dumbstruck. They couldn’t contain their laughter. But when the dumbstruck looks were accompanied by tears, they admitted to Bon-tilith what had happened. He was none too happy.

Just then, a report over the loudspeaker blasted “Here this: a terrible storm has resulted in an avalanche at Doringray Residence Cave. The cave has collapsed.” The leppies were without words—a phenomenon quite unusual for them. They had transported the entire load of toys to Doringray! When the wreckage was discovered, every single toy had been destroyed. Santa was devastated; he and his workers simply could not get enough toys made and delivered by Christmas. It was a sad, albeit rare Christmas for the children of Earth that year.

Thankfully, the leppies fessed up. They hid nothing from Santa. However, he was less than his merciful self. In one of the rarest displays of wrath witnessed by his most ancient workers, Santa banished the leprechauns from the North Pole forever. The leppies traveled from North Pole to Greenland, then from Greenland to Iceland. No one wanted to harbor these strange folk; not only had word travelled quickly, but they were a strange-looking breed. Eventually, they made their way to the shores of Ireland.

They took up residence in the Northern parts and wooded sections in the south of the island. For many years, they did very little but show their remorse with tears and drowning in the local stout. But after a while they banded together again and dedicated their lives and their children’s lives to righting the wrong they had committed. From that time forward, they decided, they would steal things only for a purpose–to give them to the poor.

And so they devised a scheme. They made up a very clever (albeit ridiculous) story about a rainbow that had a pot of gold at the end of it. They told this story to whoever would listen. Well, to anyone who was rich and would listen. And they promised to escort them to the rainbow, where they could partake of the pot of gold.

But, like any ruse, they needed some gold up front as payment for their services. So they took gold, toys, and other goodies from all unsuspecting fools.

Because of the inherent greed and wild-eyed dreams of the people, they were soon richer than all the world’s kings and princes put together.

Of course, they never quite led anyone to the rainbow or the pot of gold.

So if today you meet a leppie, do not be deceived by his friendly nature or promises. He (or she; yes, there are she-leppies) is only trying to get your goodies. Even though they would go to someone who needs them more than you!