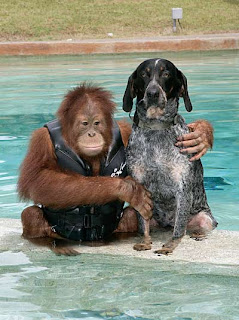 Let’s play “What Would a Psychiatrist Do?” But first, a true story.

Three-year-old Roscoe, an orangutan, lost his parents. To no one’s surprise, he became so depressed that he wouldn’t respond to any medical treatments. He evidenced all the classic symptoms of depression: low energy, no longer caring about things that had onced sparked his passion, poor concentration, moving slowly, dysphoria, and poor appetite. The veterinarians didn’t think it was a stretch to presume that he was quite sad and that he would soon die from it.

The zoo keepers came up with an ingenious plan. They found an old sick dog on the grounds in the park at the zoo where the orangutan lived and took the dog to the animal treatment center. The dog arrived at the same time the orangutan was there being treated. What they found astonished them.

Almost instantly, the two animals were drawn to one another. They began playing together, showing affection for each other, and even grooming each other. Before long, Roscoe’s energy came back, she began eating, playing, and behaving, well, like a healthy orangutan.

The two lost souls have been inseparable ever since. Each always tries his best to be a good companion to his new found friend. They are together 24 hours a day in all their activities. It’s like Ernie and Bert.

What can explain this? It’s quite simple, really. The orangutan found a new reason to live. Yes, both animals’ existential crises had been solved.

Now, what would have happened had this been a human being and instead of zookeepers, the child had been in the care of a psychiatrist? You know exactly what would happen. The psychiatrist would have looked at the list of symptoms, then the resistance to other “treatments” (as if grief were a disease that needed treatment), and then prescribed drugs to the child.

Sound ridiculous? Welcome to psychiatry. If depression is a mental disorder–due to a broken brain –then psychiatry makes some sense. But depression is not a mental disorder; it is part of the human condition. Apparently, it is also part of the primate condition; we feel sad when we lose deep connection. Blessedly, we can feel better by reclaiming or building new, intimate connections.

Depression is normal and even healthy for most people. It tells us something is wrong with our lives–not our brains. If we pay attention to the gaping holes in our lives, we can not only avoid staying mired in depression, but we can prevent most of the more severe depressive episodes in our society.